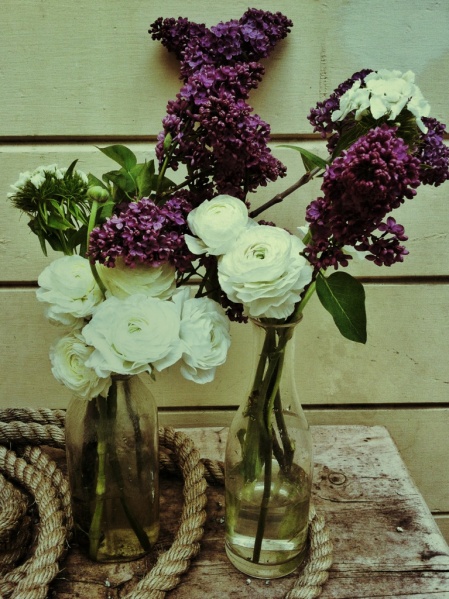 I lost my father today 6 years ago.  It doesn’t get any easier…but I continue to grow. I had my day of solitude, eating a Vietnamese sandwich overlooking the San Francisco cityscape and writing down all those great memories of him.  After a day of sun the clouds came moving in,  I walked to Bi-Rite and bought some beautiful flowers.  Bountiful lush and blossomed lilacs placed there positioned amongst the great array of other flowers.  But also my favorites ranunculus’ were sitting proudly alongside the others.  I brought home the two bunches and made a celebratory arrangement for him.   I came home and with scissors in hand began to prune each stem.  As I was making a flower arrangement, UB40’s Red Red Wine, his favorite song came on.  I smirked, knowing that his presence was surely there – every time the birds chirp- every time I smell a donut-, every time I cook, I am sure that my love for food and cuisine comes from him.  He was so wise,  he always told me that birds were NEVER to be kept as pets because they had wings and were to fly…something his grandmother had told him.

When I was a little girl I dreamed of playing the violin.

One day in my fathers beat up 1979 Toyota Celica whose interior had been deeply engrained with the exhaust fumes.  I remember crouching down in the back seat, quietly pretending like I was playing the violin.  With both my eyes closed,  I imagined the bow in one hand and my chin resting the on the body of the violin, my fingers; thumb… ring middle and forefinger draped over the strings…I dreamed and played.   The climactic moments the drawn out solo’s I dreamed of being the girl on stage that had the ability to lure a crowd into a different world.   “What are you doing back there??” he asked,  I was pretty embarrassed, I perked up pretended like I was just looking for something in the back seat, I looked into the rear view mirror to see him flash his smile.

A couple of days after he passed my brother and my mother were in the bedroom, out of the blue a butterfly appeared flying around the room.  When my mom tells me this story she also reminds me that no windows were open.  She kneeled down and she asked if it was him,  it landed on her shoulder, then her cheek, then it flew off and disappeared.   Skeptical I asked my brother, he nodded he wouldn’t have believed it himself if he didn’t witness it.  I think that moment changed him.  Butterflies can be a symbol that a loved one’s soul is visiting you.

I had a brief couple of months in Southern California before I decided to move back to San Francisco.  I was a waitress at the time at a small restaurant, and it also happened on the day of my birthday.  After a long brunch shift the staff both front of house and back of house chef and owner pulled out a bottle of champagne.  After the bubbly was poured the small staff of 8 people clinked glasses and wished me a HAPPY BIRTHDAY!!

It was a sunny beautiful day, warm and inviting it was a great shift.  As we clinked glasses a white butterfly flew in.  My eyes began to well up, and begun to tell the staff the story, a bit hesitantly but also proudly.  Thirty minutes waltzed by, and the staff of eight meandered to a staff of three – I was heading to my other job at the time and had to leave and as I grabbed my belongings we noticed that the butterfly was still there resting on the shoulder of the door.  My boss said “Tina if that butterfly flies out with you when you leave, I’m going to church on Sunday.”  I made my way out the door, about three to five steps out, I turned a left the butterfly brushed up against the side of my face flying pass me into the beaming sun and melted into the horizon.  I looked back and saw my chef, arms crossed nodding his head up and down smiling at me..the owner of the restaurant had his arms in front of him, palms up shaking them, eyes wide, exclaiming “What the F*&@!”.

He last visited me in a dream.  We were being chased by Karl Lagerfield clones.

As a little girl every single time I would cook something, my father would exclaim that no one cooked like me.  He enjoyed the Thanksgiving dinners I cooked every year for the family from my first at 13 to the last at I think 26.  HAPPY THANKSGIVING every single day to you dad and for me to cook my turkey with all the fixings again for you one day.